Whatever you may think of meditation, you might be surprised to know that almost everyone does some form of it at some point in their life. It may bring up images of yogis sitting crosslegged on mountaintops, but all meditation is, in essence, is bringing a calm but steady focus and concentration to a task. A man once told me of the pleasure he took in mowing his lawn every weekend, during which time he would describe himself as free of worries, thinking only of the the action of the mower, while relishing the smell of cut grass and the warm summer sunshine. I think he was a touch put off when I told him that sounded a lot like a form of meditation to me. For some, it’s fishing; for others, prayer. Still others perhaps do sit crosslegged on mountains while doing it, but most people have something they do that focuses and relaxes their minds.

For some, meditation may sometimes involve taking a great deal of time and effort to get themselves inside an abandoned building. Once there, the act of photography is but a task to hang their concentration on, while the external world melts away. For where can the world seem farther away than in a town like Pripyat, unoccupied now for thirty-one years? It can be easy to imagine themselves as the last human on earth, a thought which can be oddly soothing to a particular personality type.

Truth be told, my time in the Exclusion Zone was often hectic as we tried to see as much as possible in the time we had. However, I developed a mantra of sorts which I’d repeat to myself when I’d begin to stress: “don’t think, just shoot.” And though I may have appeared frazzled while running from place to place, fighting with my tripod which was on its last legs (it didn’t make it back to the States), every time I set up and framed my shot, my mind was clear.

These photographs are the fruit of this peculiar type of meditation. 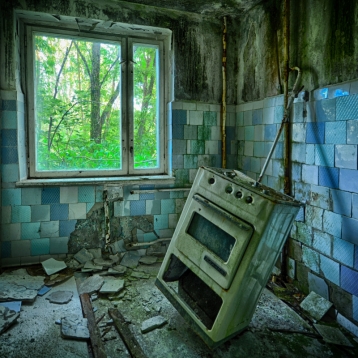 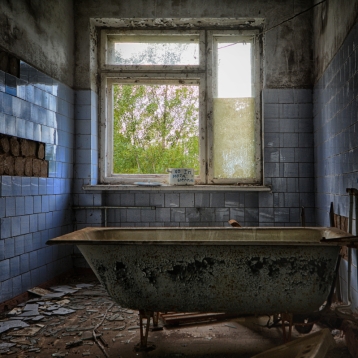 I’m not a very sentimental sort, but it’s hard not to be awed by the pathos of these bassinets, symbols of birth and fertility, juxtaposed against the setting of the Pripyat hospital, one of the more dangerously irradiated buildings in a town notorious as a place of poison and death.

2 thoughts on “Reverie in Blue”