Three years ago, a wave of protests against a corrupt government washed across Ukraine. The epicenter of the movement was Kiev’s Maidan Nezalezhnosti, or Independence Square. (A good summation of those events can be found on Wikipedia.) When the dust had settled, the president had fled the country and pro-democracy activists had gained the upper hand.
In many ways, this is still an ongoing story. As I’ve alluded to in previous posts, Ukraine is very much in the process of writing its own history and charting its future course. Corruption is still a problem, and the country is still unsure of whether to join the EU. But the remarkable thing is that these protests have happened at all. This is a part of the world dominated by a Putin-led Russia and his creaky oligarchy, and it would be very easy for a country to backslide into a satellite role as many (including neighboring Belarus) have done.
The ultimate legacy of what happened on the Maidan three winters ago will not, therefore, be found solely in today’s politics or what upcoming elections bring. Rather, it may be remembered as the time and place where Ukrainians announced to the world that they will be the authors of their own destiny, whatever the result.

Monuments to the martyrs of the demonstrations (dubbed the “Heavenly Hundred”) can be found around the square as well along Institutskaya Street which leads to it.

Like any popular public square, the Maidan has its share of cheezy hucksterism, but is also a place where regular Kievans come to take lunch or relax on a bench. 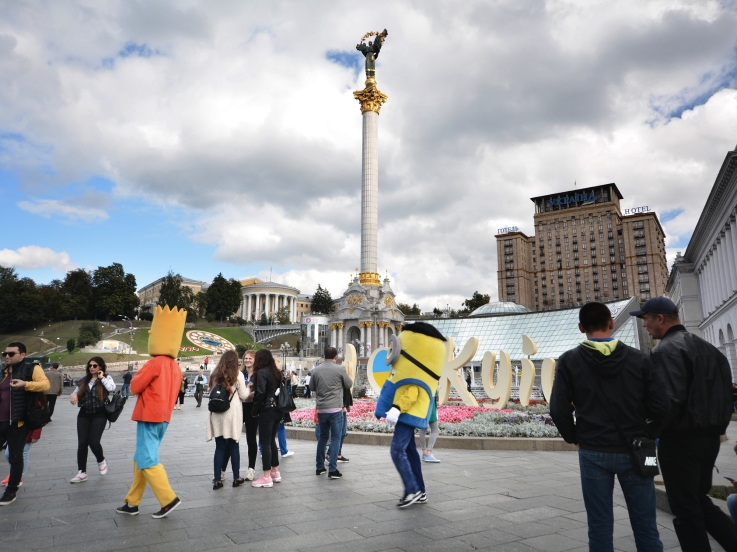 Fountain on northwest end of square

One thought on “The Maidan”